Here is one of the most popular training program in Schibsted Tech Polska: Tech Jump!  With a personal mentor, software engineers can learn a completely new technology. 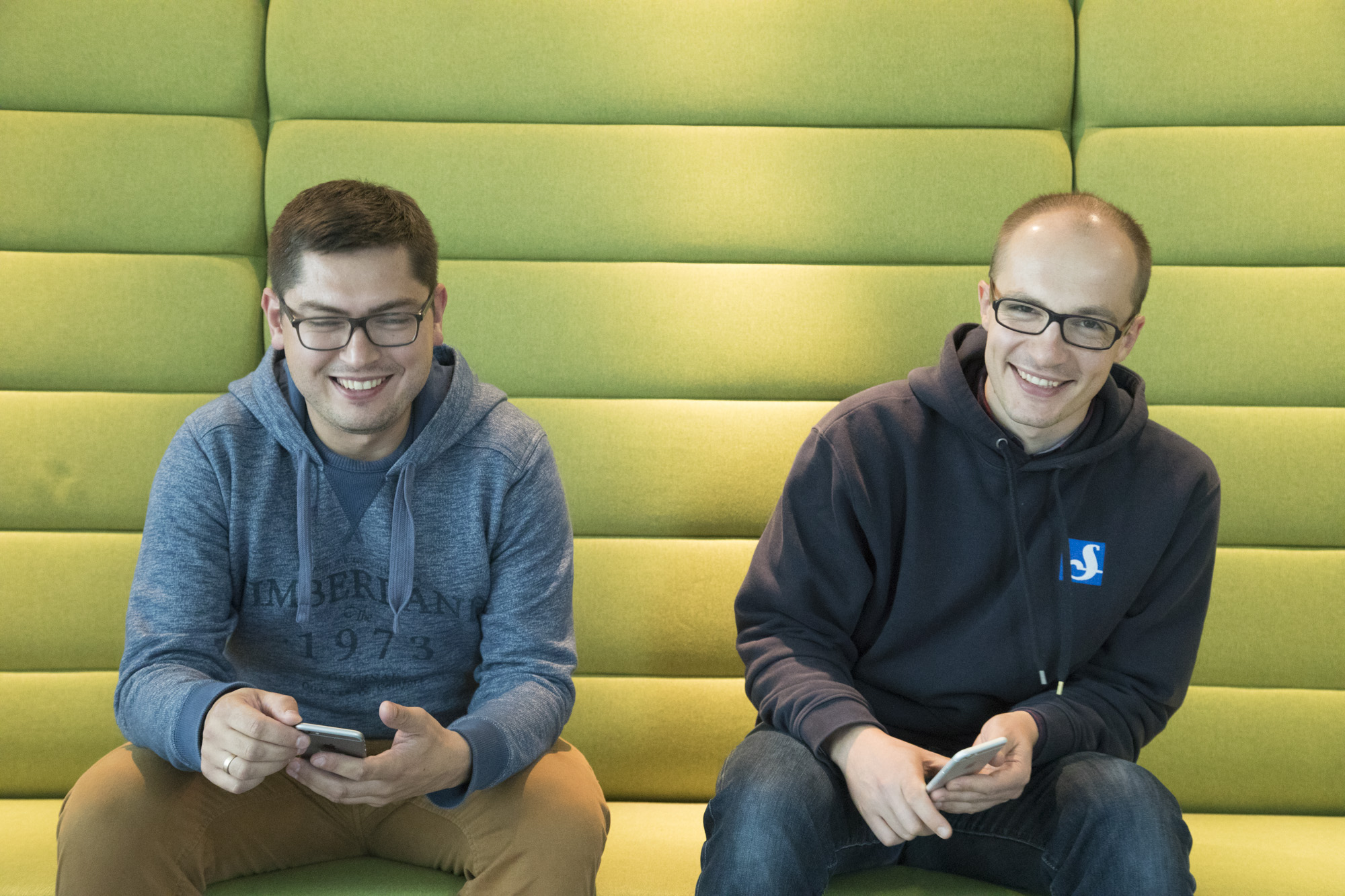 Who said a Java developer may not also be curious about developing for iOS? And what about changing from PHP to Scala?

In Schibsted Tech Polska the software engineers are invited to make a Tech Jump! So far about 30 employees have been through the six-month long program, allowing them to learn a completely new technology.

“I wanted to learn something new – and this was the perfect opportunity,” explains Java developer Przemysław Godyń, who has worked hard to master developing for iOS. As his personal teacher, he had colleague and engineering manager Maciej Walczyński,  a very experienced iOS developer.

Tech Jump is different than most other corporate training programs. There are no classes to attend or formal training sessions.  Instead, it is a peer-to-peer training program with a colleague as your personal mentor. It requires hard individual work, but with the support of a peer with long experience in the technology of your choice. 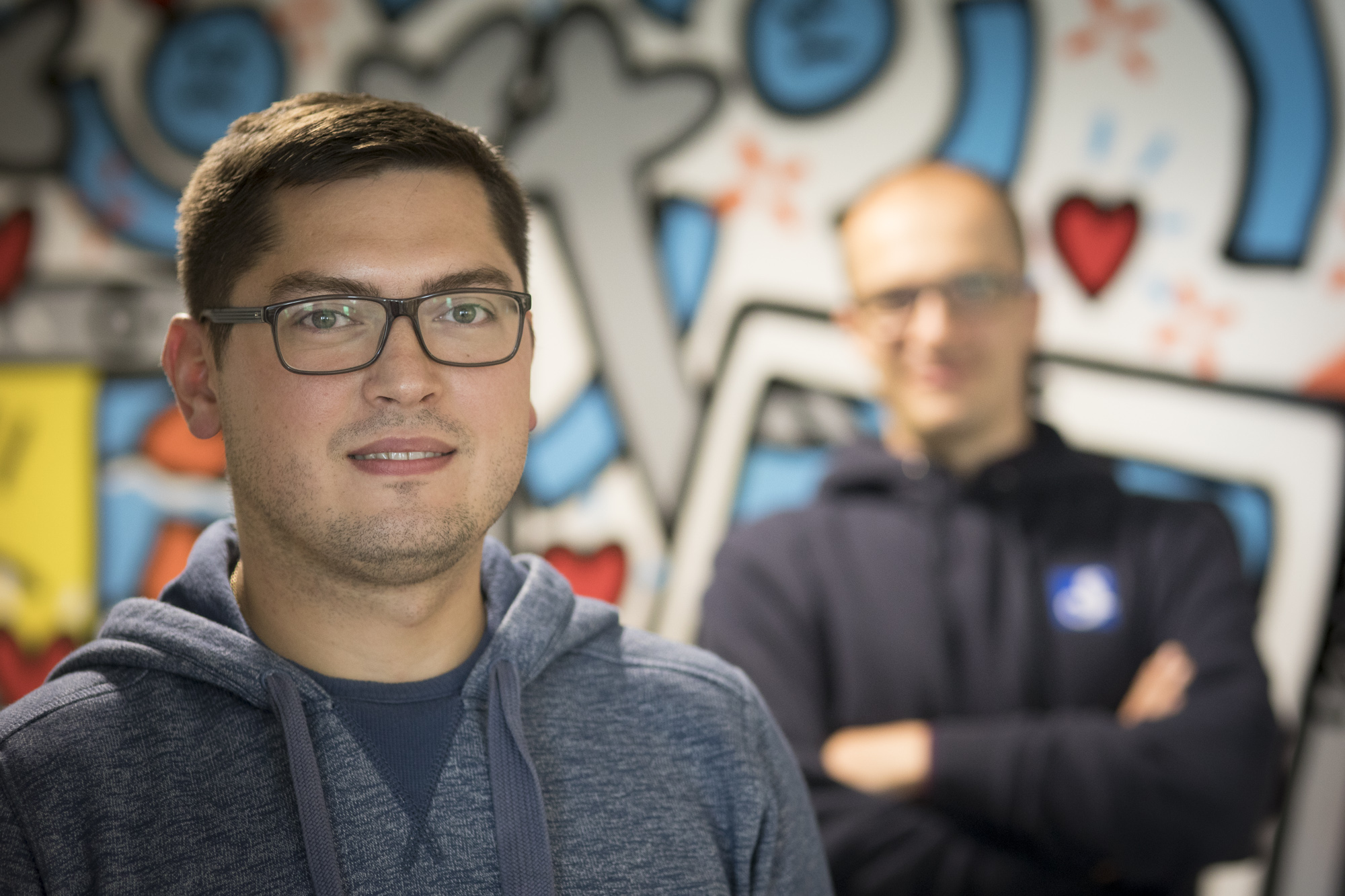 BACKED BY MENTOR: Przemysław Godyń was supported by his mentor Maciej Walczyński 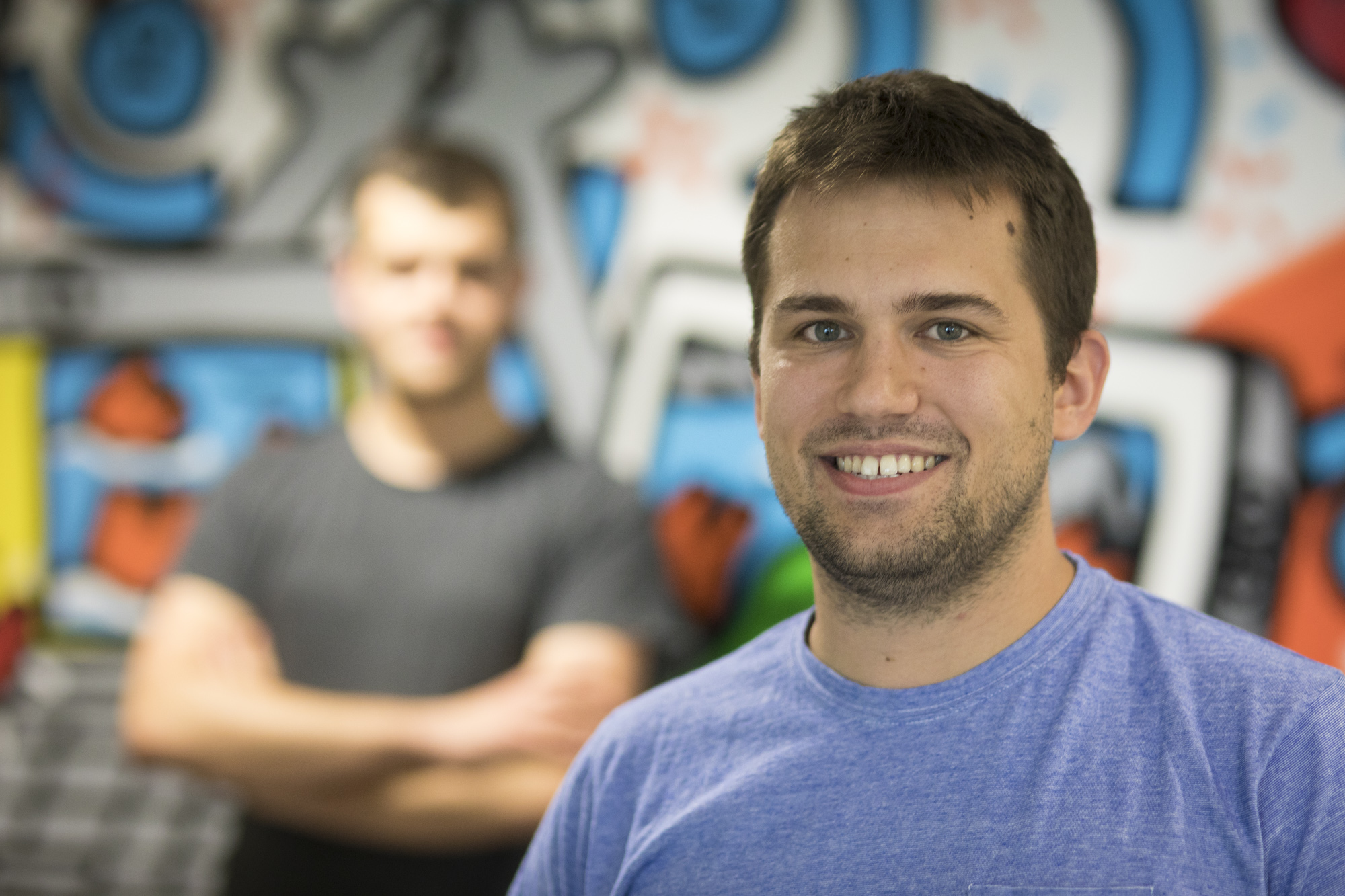 BACKED BY MENTOR: Krzysztof Rudowski had the support of mentor Mateusz Titz (in the back)

“All the mentors receive a special training in being a mentor for another person. The training is run by an external company. It is important that the mentors are dedicated and motivated to do a great job. Usually, they are colleagues who are eager to share their knowledge with others, ” says HR Project Partner Marta Marczykowska.

Spend both work-time and spare-time 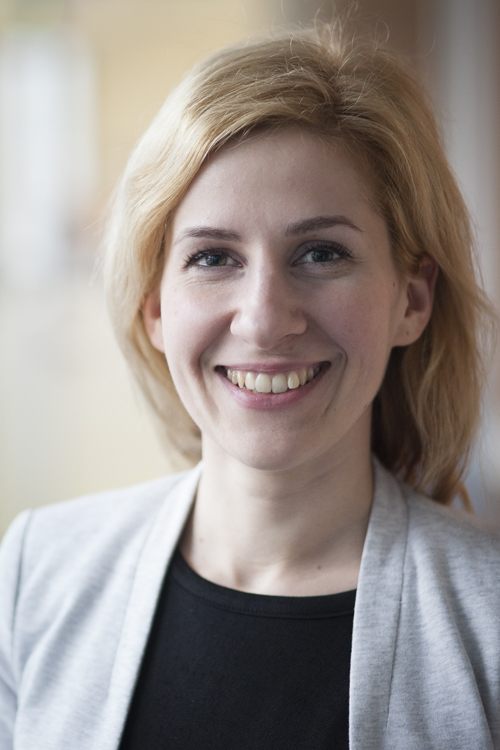 The student can spend up to four hours of his/her work-time per week learning the new technology. Part of this time is usually a weekly meeting with the mentor. It is expected he/she also spends some hours on his/her own time to study and develop the skills.

Marta Marczykowska says that there is a big interest in the program. In February 23 software engineers applied – and 14 were accepted.

“Why is Schibsted Tech Polska running this program?”

“It is all about us as an employer being open to the personal development needs of the employees. At the same time we help them develop new skills that can be useful in other projects for Schibsted.”

Tech Jump from back-end to front-end

Krzysztof Rudowski has been one of the 14 participants in the program this year. He is a backend developer in our team VG Niche and Growth. At first, he planned to develop for iOS.  “But then the only front-end developer in our team resigned and we discussed how we should solve that. The conclusion was that it would be very beneficial both for me and the team if I learned front-end technologies.”

Front-end developer Mateusz Titz stepped in as the new mentor and together they made a plan for the program. One task was for Krzysztof to develop an app using several of the technologies he was studying.

“It was very interesting – and I really learned a lot!  The front-end technologies I studied were also being used in our team´s project – and that made the learning experience even better”, says Krzysztof. 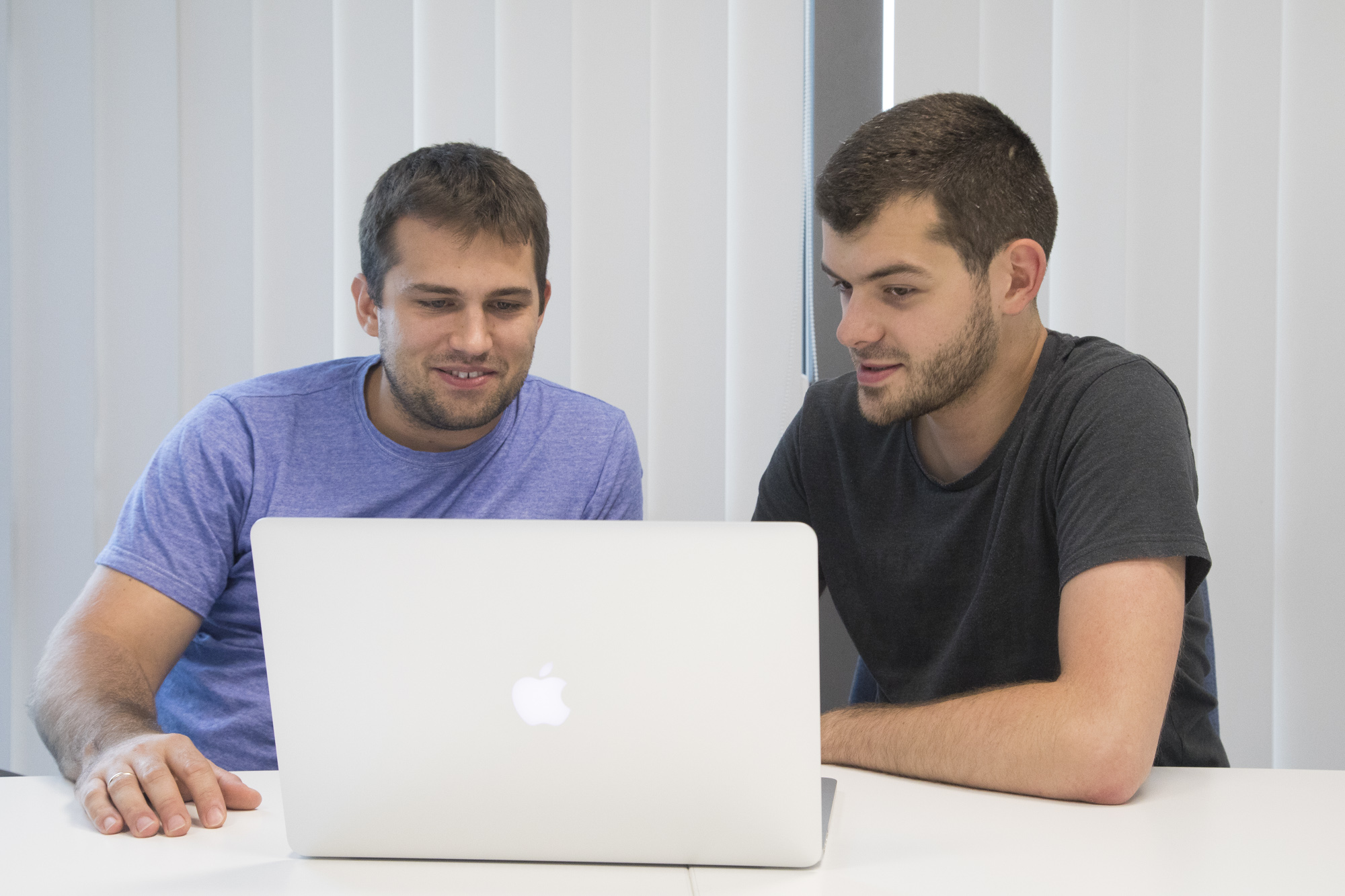 Tech Jump from Java to iOS

Przemysław Godyń has worked as Java developer in Schibsted Tech Polska for more than five years while his mentor, Maciej Walczyński, has been almost as long as a team leader and iOS developer. Both are senior software engineers but in different technologies.

In the Tech Jump program, Przemysław had to become the junior again, learning a new programming language from scratch.

“But he has the mindset of a senior engineer, and that makes it much easier for him to learn to develop for iOS as well,” says mentor Maciej.  ” He was very motivated and spent a lot of time on it. The end result was very good!” 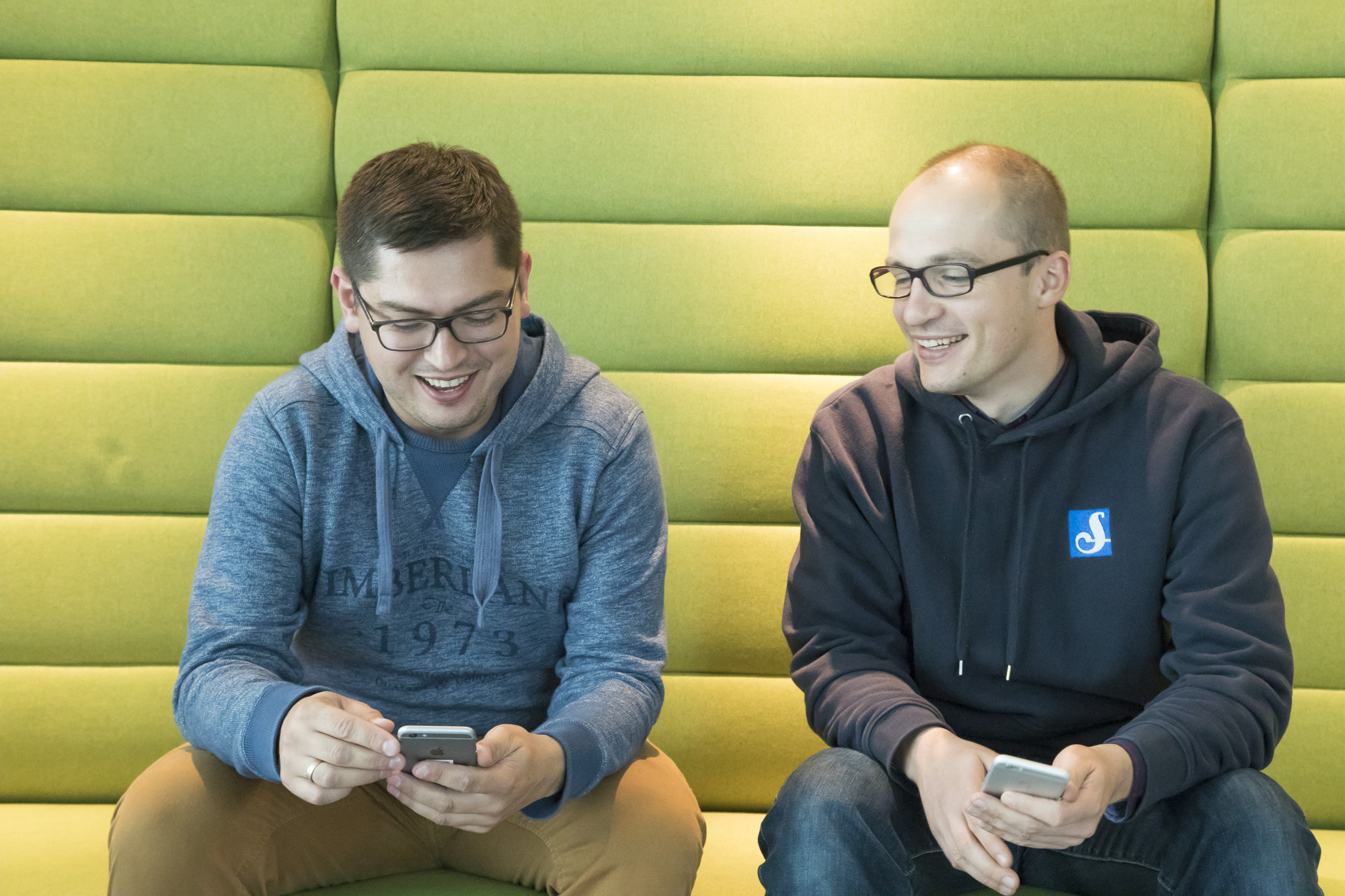 “A great thing with using personal mentors in the company is that we double the learning effect, ” says HR Project Partner Marta Marczykowska.

She explains that not only the mentees gain new knowledge, but also the mentors.

“I certainly learned a lot myself as well,” confirms mentor Mateusz Titz. “When you have to explain something to your colleague, you tend to triple-check that everything you say is correct. And I had to ask myself all those questions about why exactly we work as we do. It was very useful!”

“Of course being a mentor made also myself a better iOS developer! Any teaching and sharing of knowledge does, as it helps you structure your own knowledge,” says mentor Maciej Walczyński.