How we produced an engaging company video

Schibsted Tech Polska – for passionate engineers! Several months of work led to a great company video. Let me tell you the story behind. 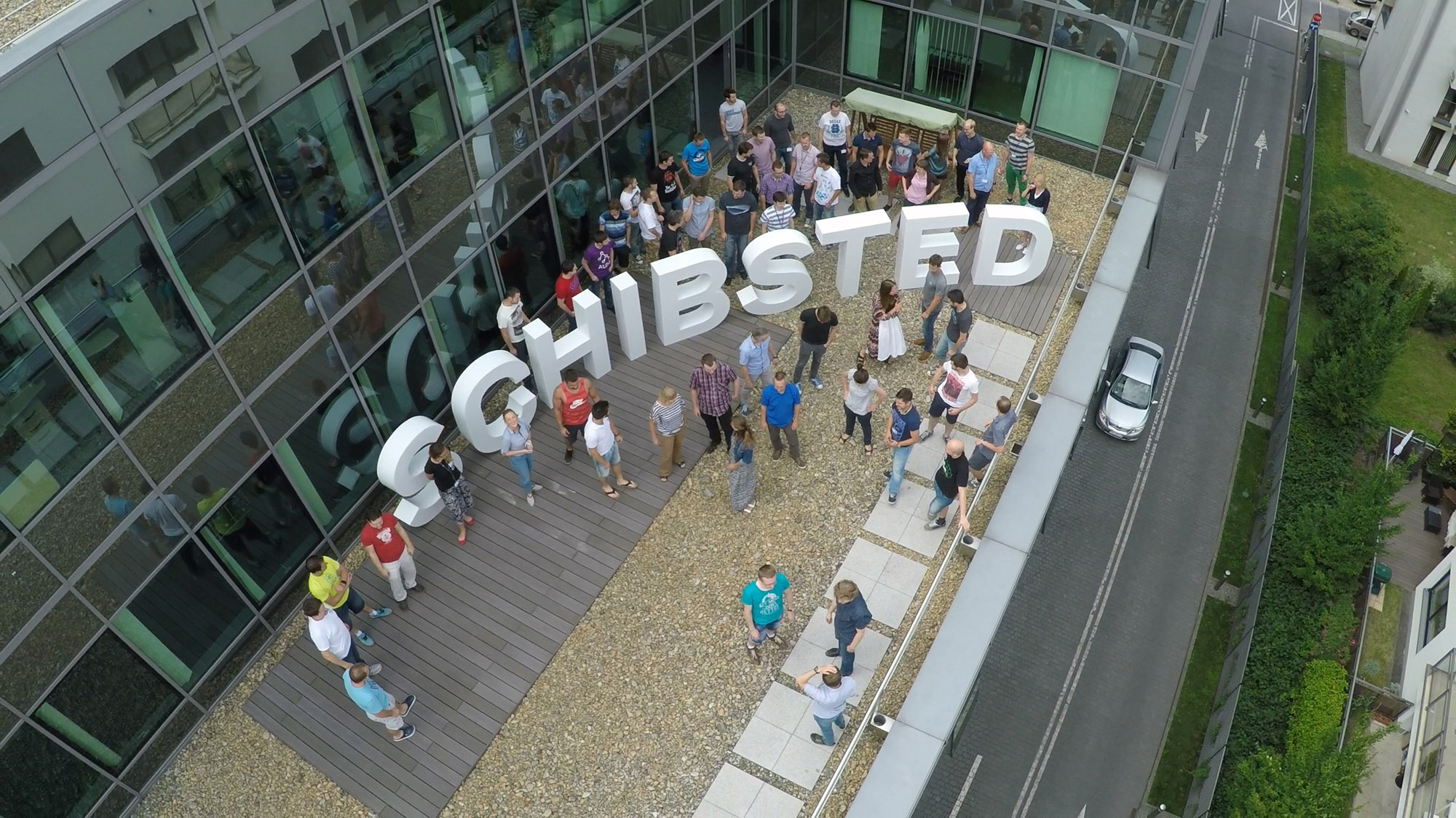 How much work can be behind a 3-minute-long video? A lot, in fact. So much that we don’t even dare to estimate. But it was worth it!

Here is a description of the long and complicated process behind a video “For passionate engineers”.

The starting point: Schibsted what?

Schibsted Media Group owns several of the leading media houses in Scandinavia – and also classified ad portals that are among the most popular sites in countries like France and Spain. However, in Poland very few people know our brand.

In fact, when Schibsted Tech Polska first started recruiting software engineers in Krakow in the autumn of 2011 none of the potential candidates had ever heard about us.

It is easier today. We have slowly been able to build a solid employer brand among software engineers in both Krakow and Gdansk, and many candidates have heard about us from friends and colleagues. But still we have a long road ahead of us.

A company of people

We put a lot of effort into how we communicate about Schibsted Tech Polska and the work our employees do. It is important for us that our communication is consistent and at the same time reflects our values.

One of the pillars is that we see ourselves as a company of people. For us these are not just marketing buzzwords. Look for instance at how many photos and videos of employees you find on our website schibsted.pl! There are numerous articles about their work. And check our Developers blog, where programmers publish 1-2 new articles every week, sharing their knowledge with fellow software developers.

Therefore it was obvious that a also video about Schibsted Tech Polska in some way or another had to focus on our great employees. 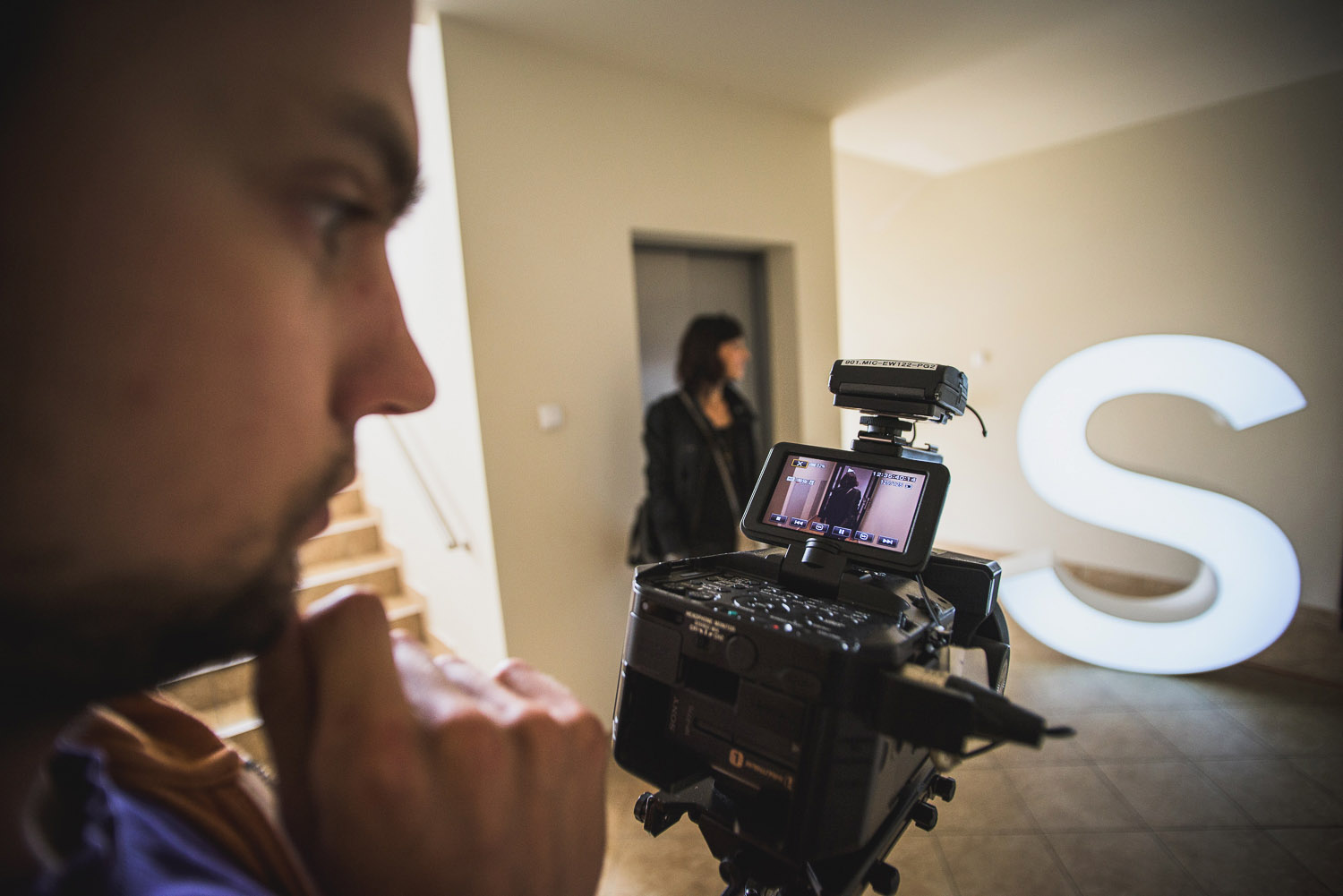 “S” for Schibsted! All the nine letters in “Schibsted” were used in the video.

In the spring, after having successfully launched our new web site, we were ready to start planning the video. Together with HR Business Partner Aleksandra Grzybowska I sat down to pinpoint our ambitions.

We wanted to produce a high-quality engaging video that could catch the spirit of our company.

We already had a lot of different videos on our YouTube page, both from different events and of employees who share their knowledge.

But we wanted this video to be special – produced on the highest professional level.

We therefore invited three video companies in Krakow to compete for the project. All were experienced in making similar videos from other companies. 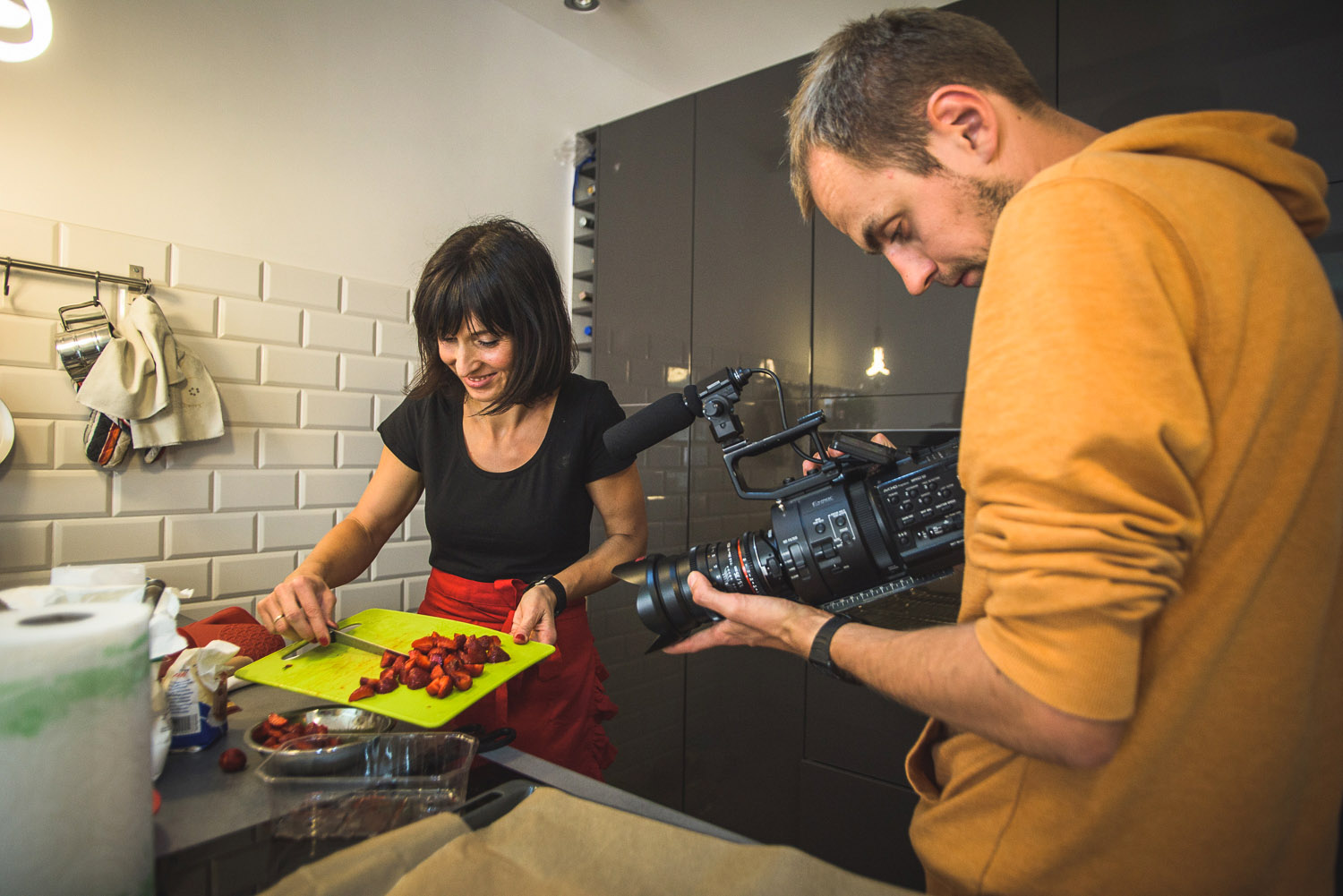 The video companies were give an initial brief of what we wanted. In meetings with them we discussed our company culture and how it was important for us that the video would appeal to the target group: Programmers in Poland.

But we did not present them with an exact idea for what the video should be. Instead we wanted the companies to help us with the story.

Personally I believe good chemistry is crucial for a project like this to be a success. You need to feel that you want to work with the people from the video company. Yes, of course costs are important. And the technical skills. But most important is that we will love to work with the persons assigned to the project.

A couple of them sent typical sales people. They listened attentively, but were not willing to play with any ideas in the meeting, as I like to do. That first had to be discussed in the “creative department” – and then they would come back with a proposal.

Another company sent the actual people who would be working on the project – and who willingly discussed alternative creative ideas with a smile. 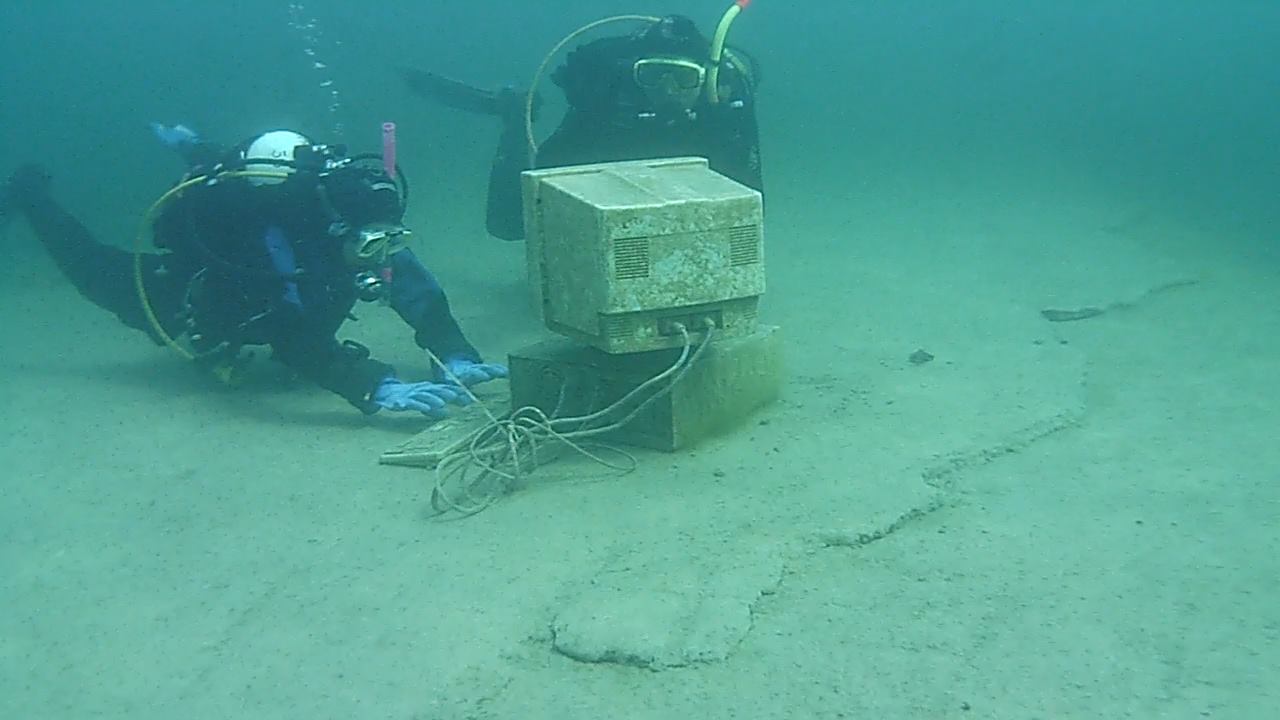 Passion for diving: Piotr Kedra and Aleksandra Niemyska trying to send an email while shooting for the company video. Photo: Łukasz Jankowski

So maybe it was no coincidence that one of the video production houses completely misunderstood us. Their proposal included no less than 12 different people taking part in the production in our offices. There was even a person set aside for catering for the rest.

Maybe that works well for a huge commercial ad production. But can you imagine a film staff of 12 people coming into an office and having everyone try to pretend they go about their work life as normal?

To be honest: We couldn’t even imagine the bill attached to that proposal 🙂

In the end we chose a small video production company from Krakow: Collab Studio.

There were two reasons for that:

Collab Studio has only three employees. As many other video production companies they hire extra staff when needed for projects.

Our main contact was one of the founders: Michał Pawłowski. It was his experience and creative mind that handheld us through the next steps of the process.

The creative idea: Stories of employees 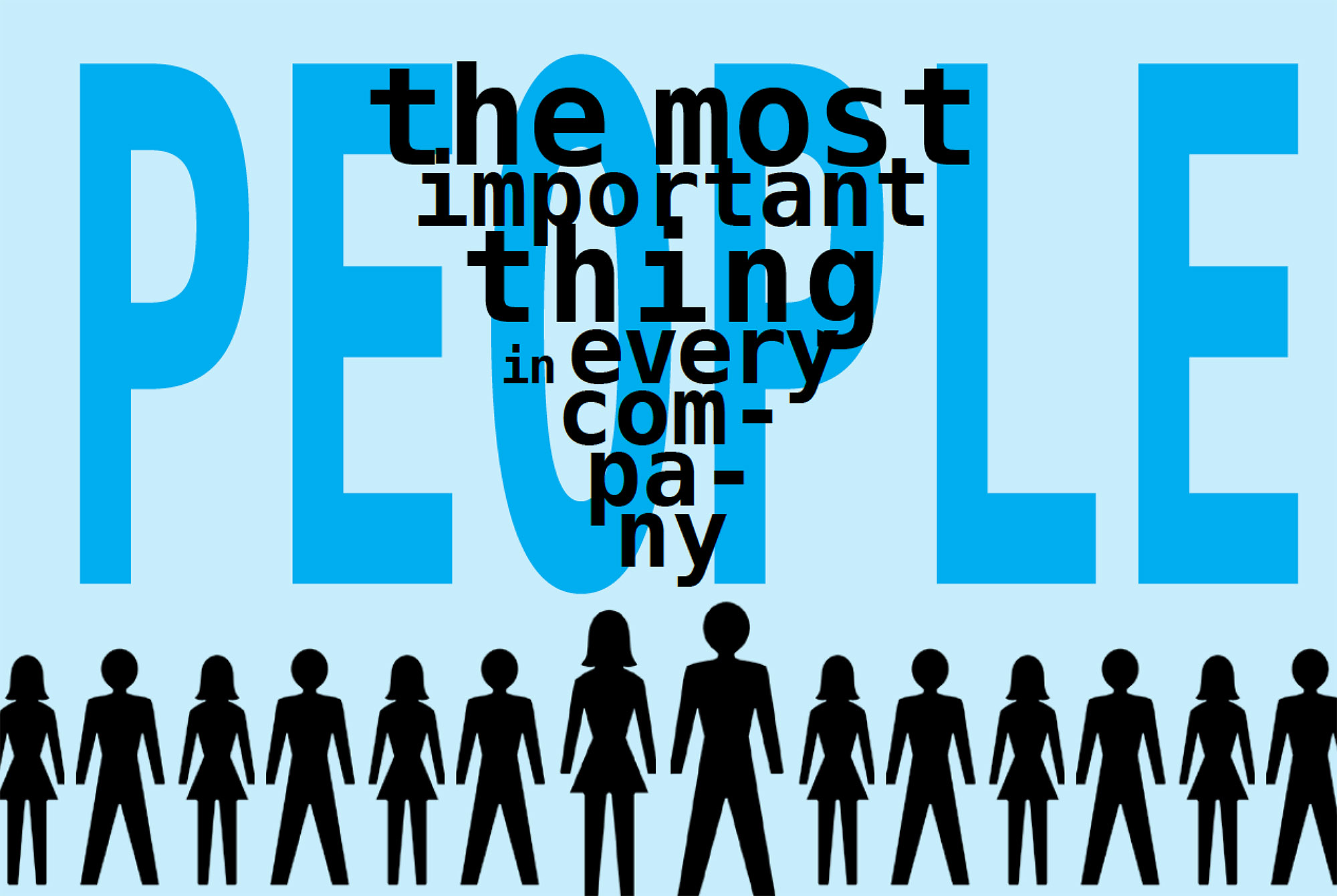 One of the pitch slides from Collab studio: Focus the video on the employees!

Most company videos focus on how great the company is – and then show some nice footage of happy employees.

The idea from Collab Studio was to turn it around. Tell the stories of nine employees and their private passions! Let those stories give the viewer an impression of how cool people they will meet if hired at Schibsted Tech Polska.

Why nine employees? Because there are nine letters in “Schibsted” – and it meant we could make creative use of the nine huge and cool promo letters we had produced for our last winter event.

It is my impression that using the private life of employees like this is not a typical Polish way. Especially compared to Scandinavia, many Polish people tend to keep a bigger distance between their work life and their personal life.

But Schibsted Tech Polska is not a typical Polish company – and not all people are the same. We were very happy to see that enough employees volunteered to share their stories. 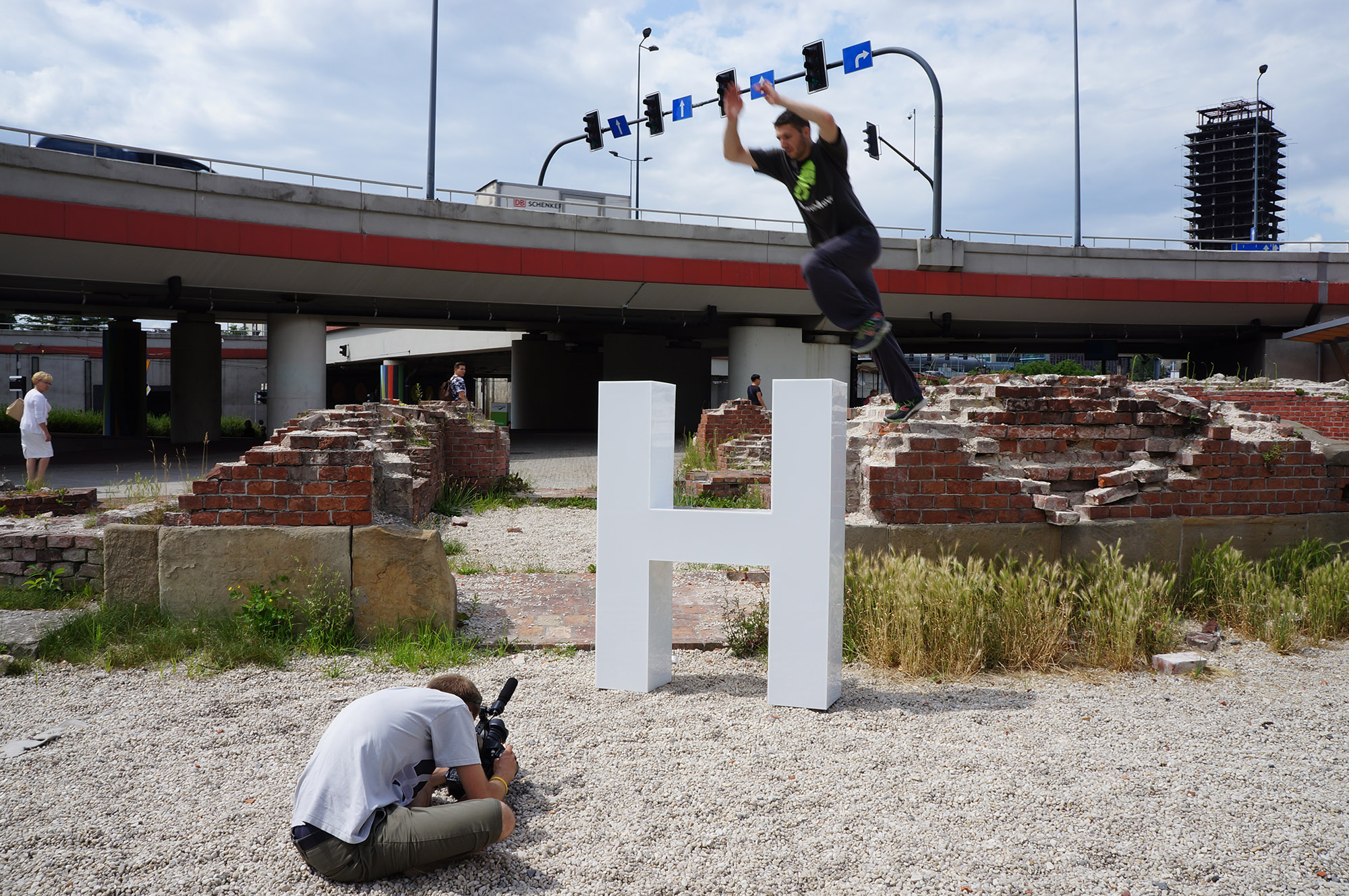 Passion for freerunning: Krystian Żwak takes a jump over the “H” letter

But who to choose among the employees for the film?

The criteria were simple:

All employees were invited to suggest people – and many did.

Finally we had a list of nine enthusiastic employees: 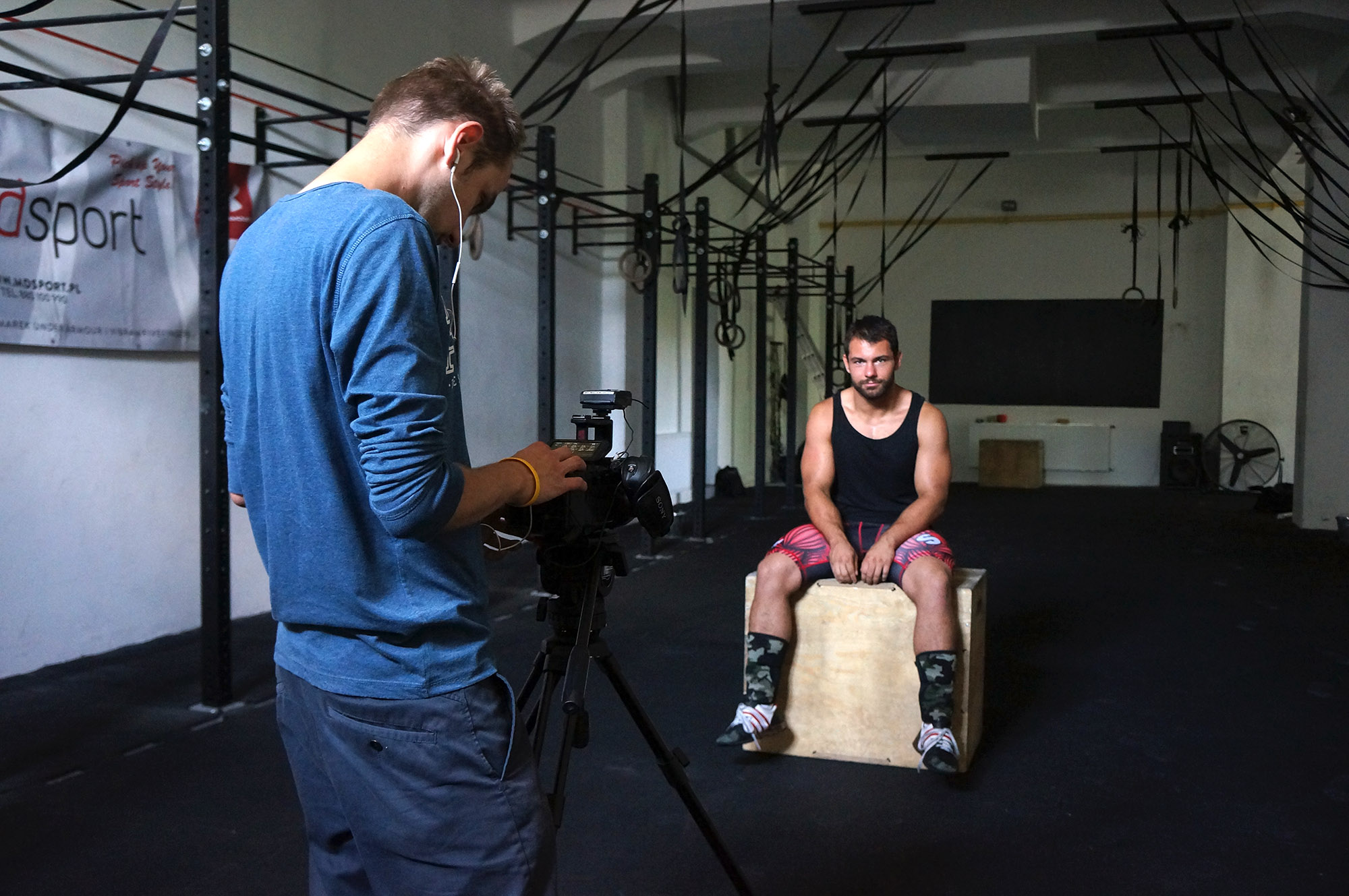 Passion for crossfit training: Adrian Kremski is being recorded for the STP video

So the decision was made. The employees were chosen. Next we had to make a more detailed plan. The video company called it a script.

In the script every scene was described: Where it would be shot, what it would show, who will be part of it, etc.

But we had one condition: We did not want to script in detail what the employees should say in the video. For us it was essential that it was natural, and that you did not get a feeling of people reading out some sentences they had been given by the marketing department.

And so it was. We listed a number of questions all employees in the video would be asked, but said absolutely nothing about what we would expect them to respond. 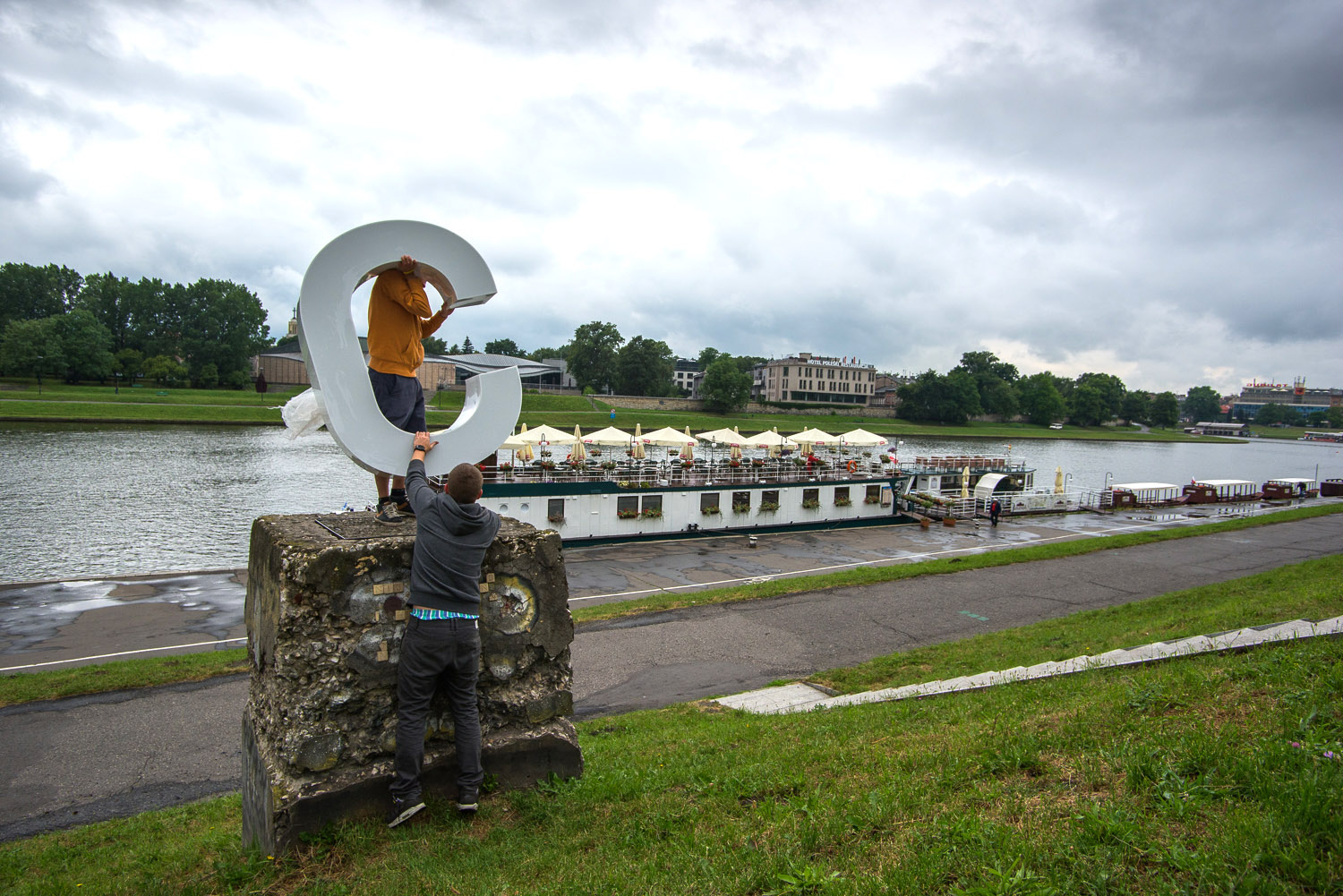 Even moving the Schibsted letters around Krakow required good planning

The creative part of a project like this is a lot of fun. But most of all video production is logistics.

Nine employees had been selected – and Michał and his colleagues said they needed one day of shooting for each of the the nine persons. In addition we had to schedule time for recording general pictures in the office.

A full day of shooting for a few seconds in the video!

That is the hassle of professional video shooting. It is a lot of hard work! And it is a balancing act between what the video producers need and the available time of everyone participating.

A detailed plan was therefore set up for the shootings. We also needed to gather permissions to shoot at several locations, for instance in the fitness club. And it all had to be coordinated with the schedule of all the participants. To limit the logistical challenges we unfortunately also had to decide to only use our Krakow office for this video and not shoot in Gdansk.

And then there was the nine Schibsted letters. They are huge and had to be transported to the locations. That small detail required its own planning.

There were phases of great frustration, when plans were blurry and information unclear. The fact that our main contact in Collab studio fell and broke his arm as all plans were made did not make it easier either.

But in the end we pulled through. The plans were made. Dates were scheduled. And the production started. 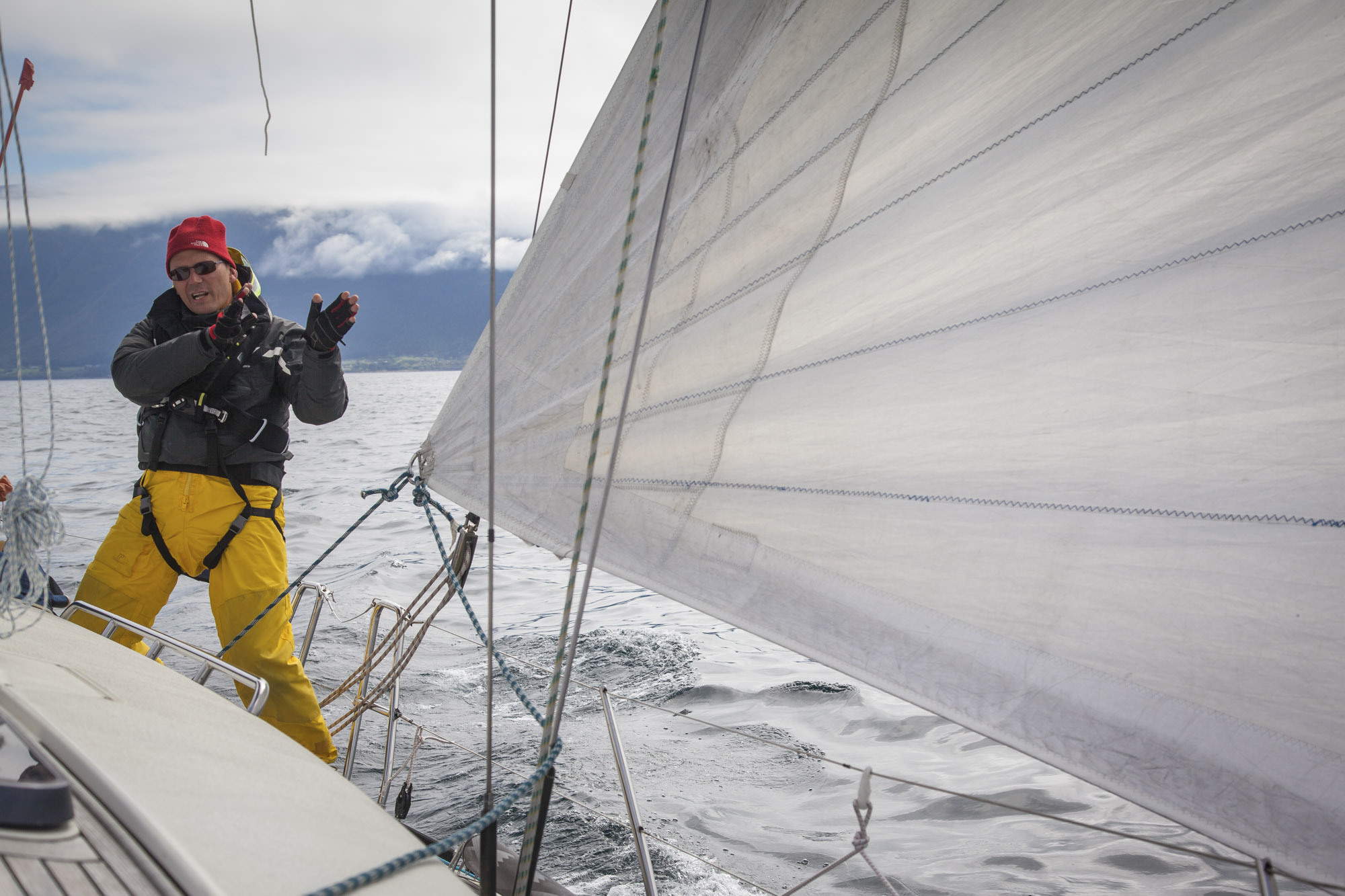 For the employees who took part it was a fun experience – giving them the feeling of being stars for a moment. Most of them had not expected that it would take so much time, though.

“It is always like that,” Michał Pawłowski in Collab studio told me.

“But to make a great video we need much more material than most people imagine.”

The last scene to be shot was with a group of the employees jumping on our roof top terrace. The scene was filmed with a drone and required a lot of coordination. 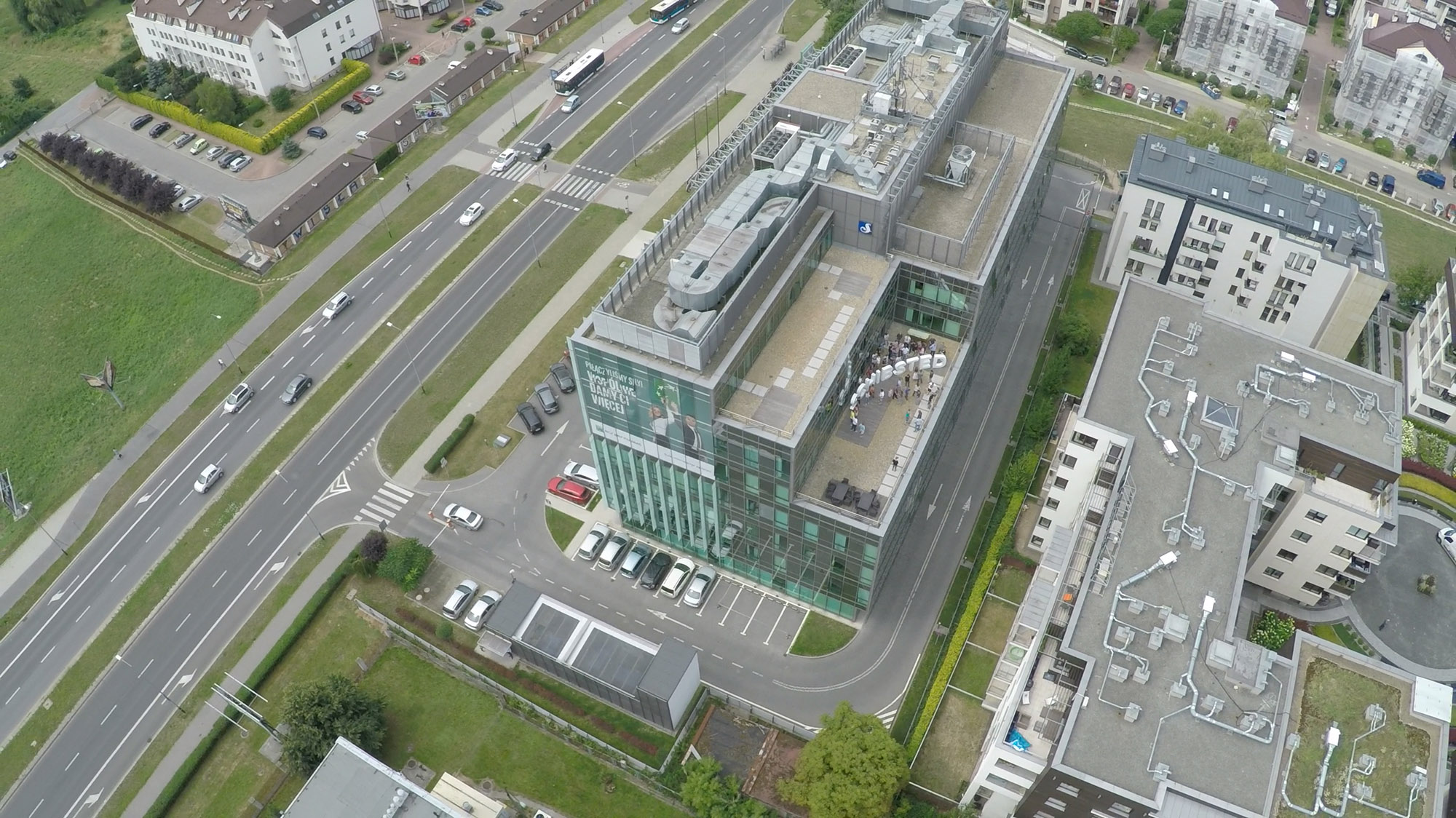 Passion for jumping: Our employees filmed from a drone when jumping on the rooftop terrace

The video material was massive, as were the recordings of what participants had said. Only from the sailing trip with our CEO Stig A. Waagbø  there were 80 different clips for the editors to choose from. In the end there was only time for a few seconds from a full day of filming.

We could of course have decided to make the film longer. But we wanted the video to be compact and tell the stories in a very shortened way. Every second of the video had to defend its place.

Michał Pawłowski in Collab Studio tells me that they typically start with the audio in a project like this. “We first selected the sound bites and then decided which video pieces should go with it,” he explains. 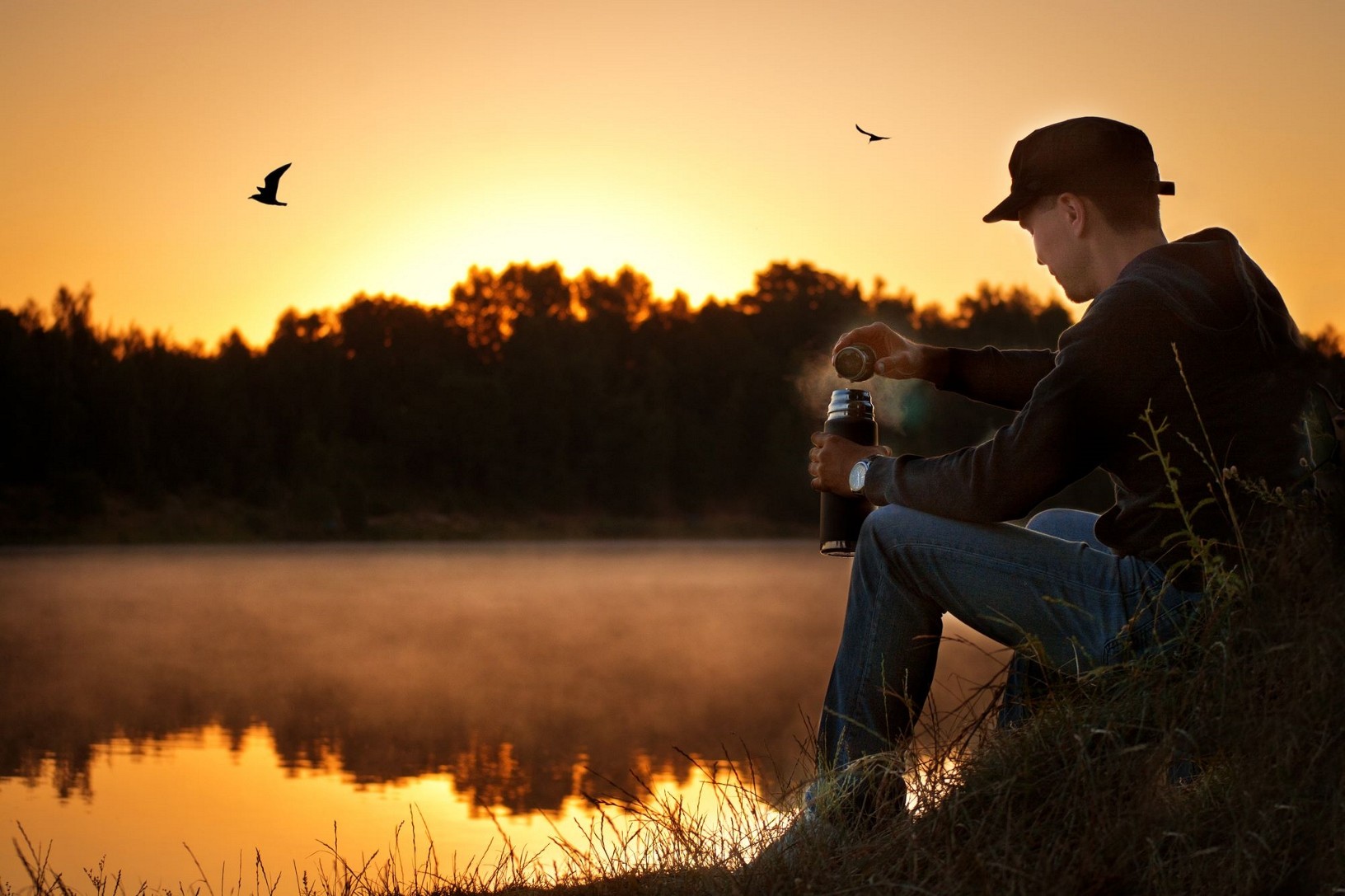 And then the fine-tuning

We were very anxious to watch the first version of the video. Would it be a major disappointment? Or had our great intentions been well taken care of?

It was a huge relief!

The video was just what we hoped for! Michał and his colleague Dominik had done a fantastic job! We were thrilled!

So were the participants of the video when they saw it for the first time. “I never imagined it would be this good,” one of them said.

Of course there were details that could be better. And Collab made several versions before we were happy with everything. But the changes were still minimal.

We showed the video publicly for the first time on our STP Partner Days on September 3. I was quite nervous, I must admit. But people loved it!

Since then we have received very positive feedback. And on our YouTube page two thirds of those who start watching the video, stay on to the end. Those are very positive numbers!

And our own conclusions? 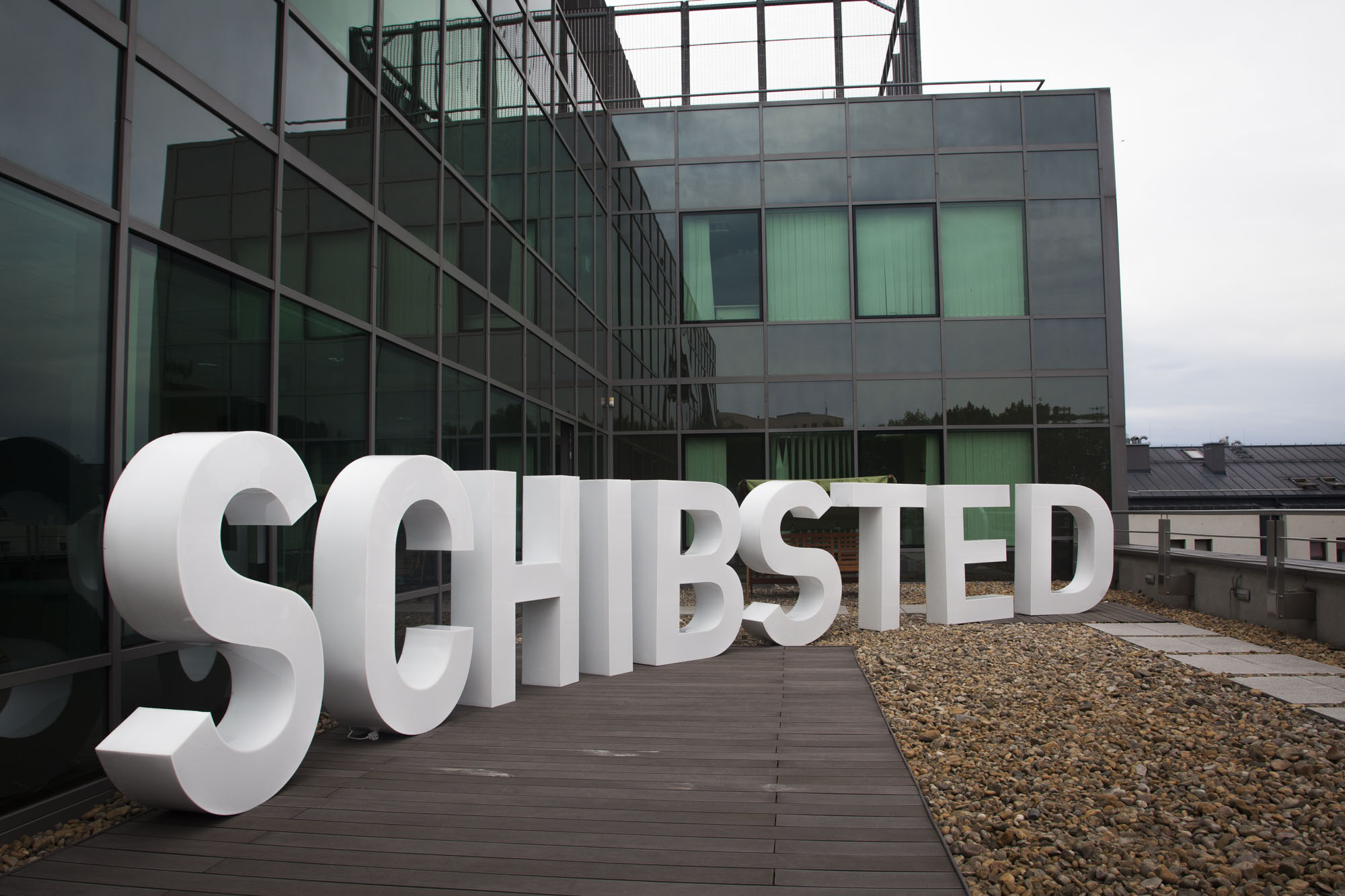 We are very satisfied and happy we did it!

But it also helps us remember our own story about what Schibsted Tech Polska is.

We are not just another IT company in Krakow and Gdansk.

We are a company of people! Great people! Smart people! People who care.

We are a company of passionate engineers!

Did you still not watch the video? Here it is!