The two seniors in the team left. But that did not stop the colleagues from winning the Schibsted Tech Polska Team of the Year award during the company´s annual Winter Event. 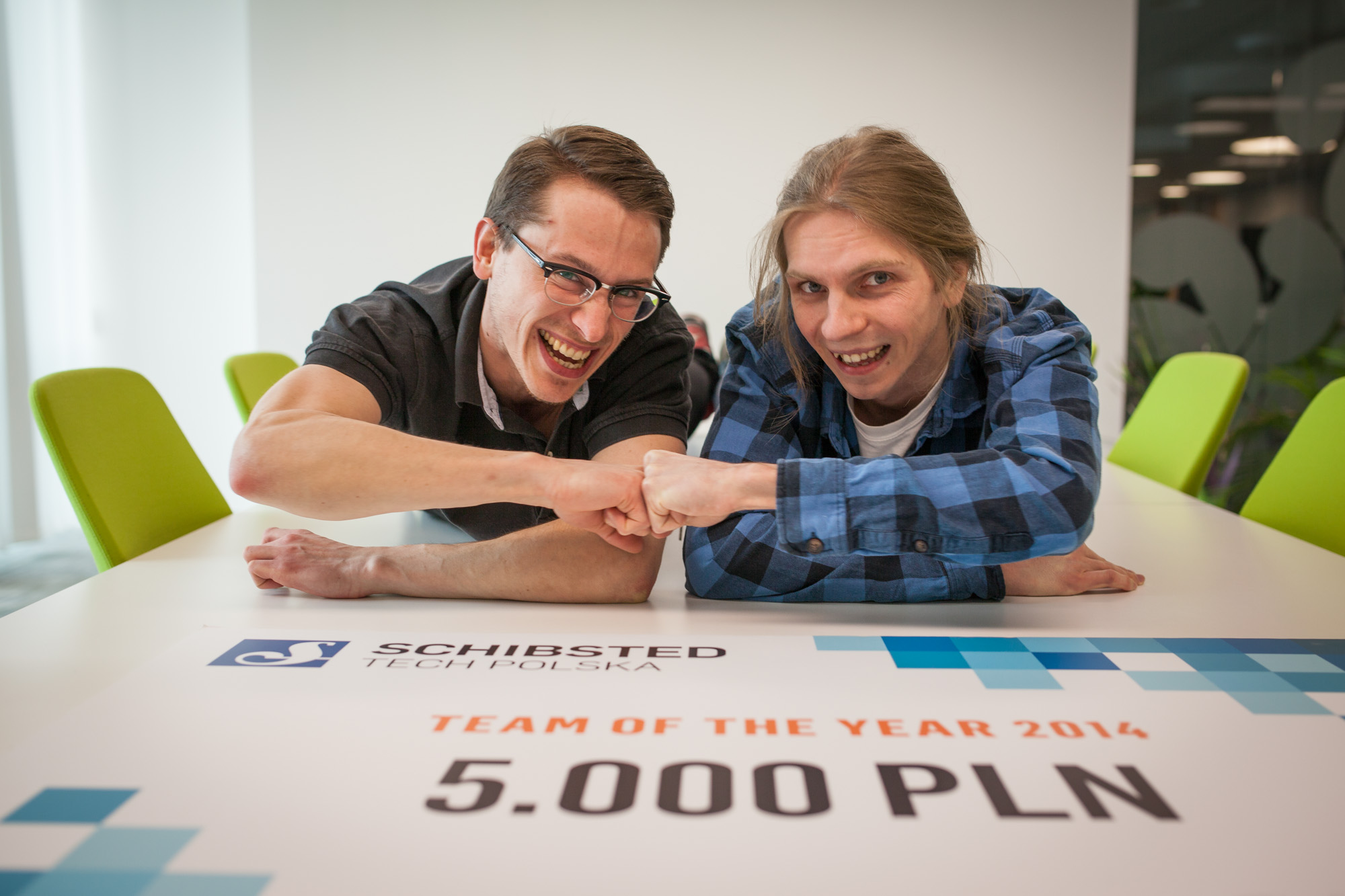 The first member started one year ago. But not all went according to plan for the Bergens Tidende (BT) team in Schibsted Tech Polska. After only some months the team leader and the senior developer left the company – and the rest of the team was left alone to do the work.

– Some colleagues in the company started saying we did not have enough work since the seniors had left. But that was simply not true, says software engineer Kamil Wolny.

So it was time to tell the real story, the remaining three team members concluded. – Many people just did not know what we were doing, adds Tomasz Kalfas.

Using lots of humor and self-irony the two surprised the participants at the STP Winter Event in Mikołajki with an amazing presentation.

Bergens Tidende is the leading media house in the western Norwegian city Bergen. The media house established its own development team in Schibsted Tech Polska in February 2014.

With only three of five positions in place, the team was the underdogs in the competition for the 5000 PLN given to the STP Team of the Year.

In the presentation they make fun of colleagues who say they have nothing to do, emphasizing that “we are the team with no leader – we only deliver!”.

– It was time to make everything straight, says Kamil Wolny. 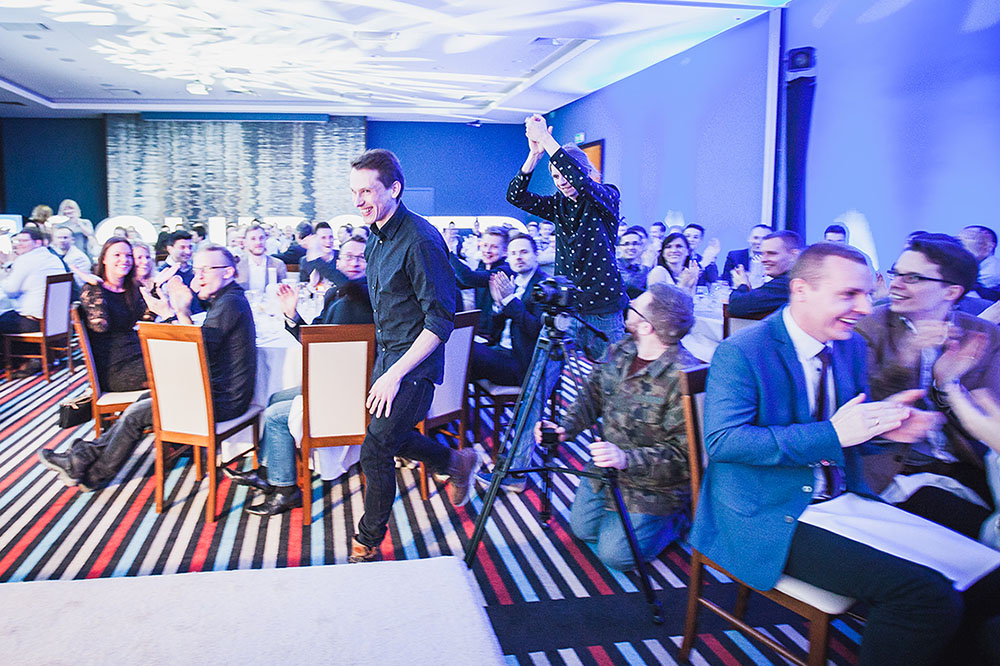 Kamil Wolny and Tomasz Kalfas happy going on stage to receive the Team of the Year award. Photo: Michał Adamczyk

A new team leader for the Bergens Tidende has been hired and will start in April. Until then the team consists of Kamil Wolny, Tomasz Kalfas and Jacek Żyła (on holiday when photos in this article were taken).

– It has really been fun to work for Bergens Tidende. They treat us like colleagues and not just a nearshoring company – and we have a really good time together when we meet in Krakow and Bergen, says Kamil Wolny and Tomasz Kalfas.

– Did you expect to win?

Of course! We always play to win! 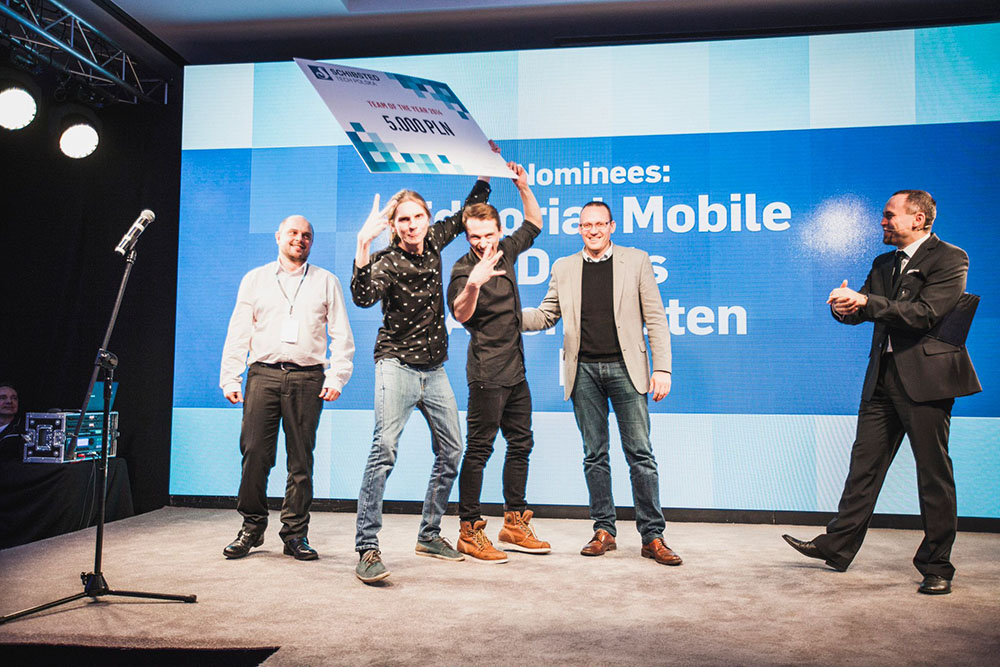 – Despite the difficulties the team has faced, they have continued to deliver great results. Almost as important as their techical skills: They are fun people to hang around, and we look forward to meeting again!

– Tomasz, Kamil and Jacek are a great team – and also imporant and good colleagues in the BT product department. I truly feel we are one team in two cities – and our STP colleagues have really put in the effort to make that happen. Since day one they have worked hard and delivered, even when they are well out of their comfort zone.