Time has come to cover the second day of Droidcon NYC conference. If you haven’t seen the first day coverage you can catch up here.

This day was filled with awesome talks. I’d say it was slightly better than day one. Hold to the end of the post, I’ll be giving notes!

Day two started with a blast – Roman Nurik, Chris Banes and Nick Butcher on the same stage! World famous trio from Google gave us some insight on what’s new in Android UI engineering. I’m a big enthusiast of Android UI/UX nuances, so I was already familiar with some of that, like the Design Library for example. What I had no idea about, that the Design Library has only one father, that is Chris Banes.

We got to know more about new Android runtime permissions, which are a good thing for the users but unfortunately a nightmare for the developers.

Another new great feature presented was a light status bar. It doesn’t mean the status bar must be white, but the icons on it would be dark grey. Cool stuff, but most probably available for Lollipop users only (or the Marshmallow in the worst case).

We’ve seen new pickers and contextual actions among with the shadow rendering improvements. Material Design is becoming even more beautiful!

Some data binding was mentioned as well. Again – this is something that I liked the most from all the new stuff on the whole conference, but it’s like an early beta of it. The worst thing is a complete lack of IDE support, which means we have to stumble on several issues, which will be gone in the near future. If you’re not an enthusiast I’d recommend sitting it up until the final release.

There was more but I need to leave space for other presenters. Better see the slides for yourself. Funny, I think nobody before came up with an idea of using Google Photos for posting slides 😉 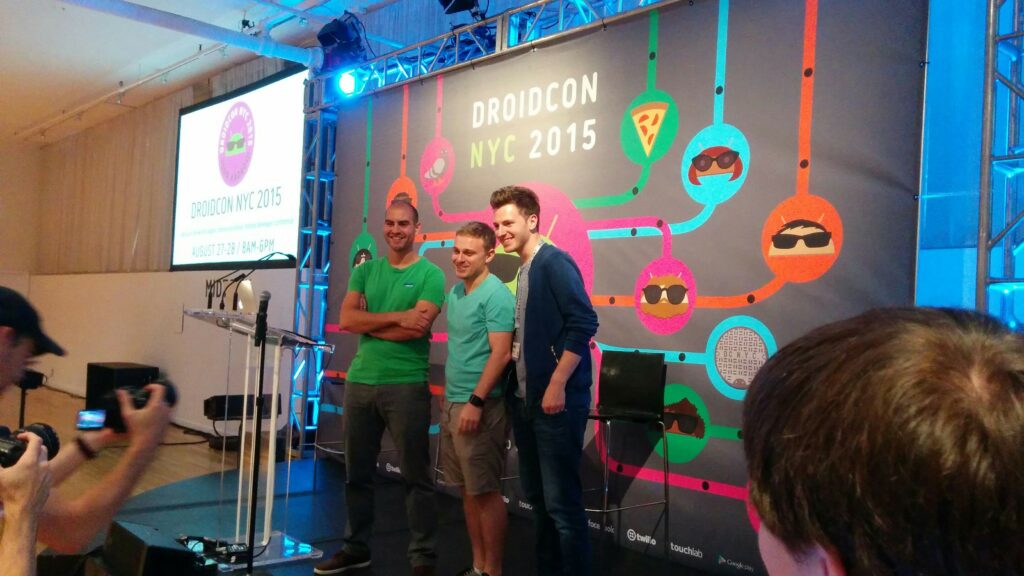 As a next dish, Michael Evans served us with explanation of annotations processors. Pretty educative, as the annotations based libraries are getting more and more popular. Still not sure why, as it’s not an easy topic. Now I know it better than before. Michael is a skilled presenter! Wish I could find his slides, no luck yet though. Lisa Wray, well known Google’s DevBytes presenter had her talk in the same time, wish I could be there too! 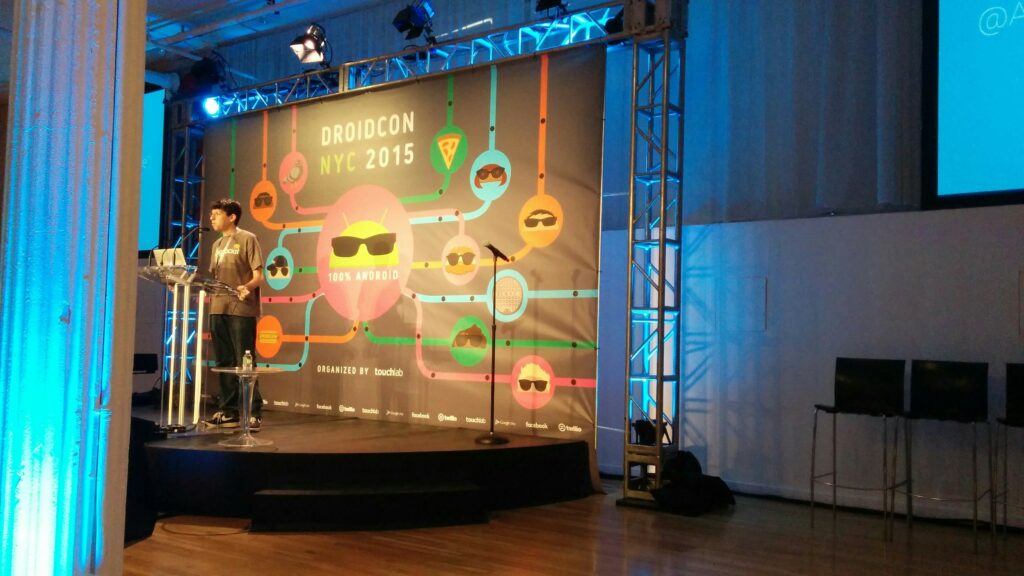 I came to hear Jacob Tabak‘s talk about data binding techniques. I loved it with every talk a bit more, and at the same time hated the fact that IDE is so not ready for this. Still struggling with a dilemma whether to try using it in production or not! Jacob did a good job giving me some final insight on the subject. Now I guess it’s time to make my own decision. If you’re still unsure or unfamiliar with data binding go see Jacob’s slides now! 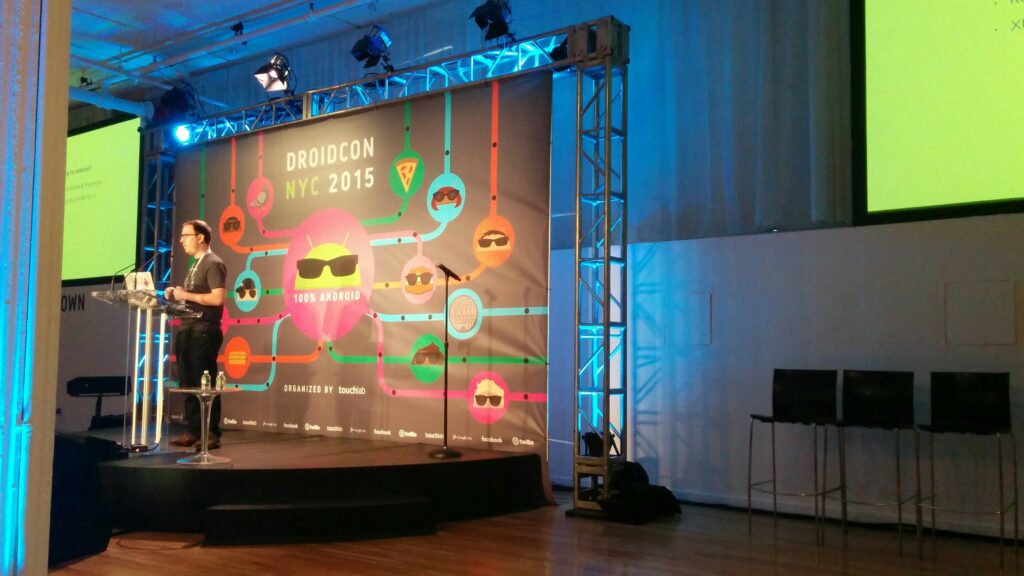 Animate all the stuff

Next talk covered animations again. Marcos Paulo Damasceno covered some Lollipop specific animations and screen transitions. Overall, I liked the presentation but at the end of the day Marcos tried to convince us that the transition animations are not connected to any API, what means we can implement it on pretty much any platform from Android 2.3 up. Honestly, I wasn’t convinced. It’s true that we can implement all the fancy transitions by writing the stuff on our own, but that’s a lot of work and code that doesn’t have to be done on Lollipop devices anymore. That’s sort of sad!

When I hear JSON serialization I think – Gson. However, there are several other options out there. Christopher Brown analysed and compared Gson, Jackson, Protocol Buffers and Flat Buffers performances. You would have never thought how big the differences could be. Gson is really slow compared to buffers! I recommend watching Chris’s slides as soon they are available. I’ll update the post as soon as possible.

Last but not least, we heard a talk about “Bulletproof Android” by Godfrey Nolan. Goodfrey is great in scaring the shit out the developers when it comes to security in their apps and he got me scared too. The bottom line of the talk was, that no app that remembers its user to avoid signing-in every time is secure and the communication could be listened to or faked. He gave us some tips to make the hackers’ lives as hard as it can be. Goodfrey has several publications about that and I’d recommend them to developers who maintain and develop apps that store fragile data.

Droidcon NYC ended after 2 great days packed with amazing talks from the best Android developers in the world.

You may catch up with other presentations using #DroidconNYC hashtag on twitter or visiting this week Android Weekly, which covers some of the talks as well.

I promised some notes. The content was absolutely great, however, there were some cons of the conference! This is the time for me complaining about the stuff, so you might wanna leave earlier 😉

I didn’t like the building the conference took place in. There were 4 rooms and only 1 of them was a real conference hall. The other were rather rough-and-ready. One room was separated from the crowded noisy lobby with just a curtain. Trust me, some great talks were ruined by that!

The heat outside was noticeable but the air conditioning inside was giving me a pneumonia. I had to buy an expensive hoodie to make it through the conference alive. Was that a conspiracy to raise the sales? Sounds silly!

Food was also a bit poor, we had a lot better stuff on Droidcon Krakow for much less money.

Summing this up, nothing could ruin the talks when the content was so great, but in my opinion Touchlab was doing its best (at trying to ruin it). Don’t get me wrong, staff was great and had nothing to do with it but it looked like a bit poor confference, which is weird because the ticket cost was high. Those speakers deserve something better! I wish they could be here in Krakow next year, we have some amazing conference spaces to use!

That will be it, I guess. I’ll definitely come back next year, if I’ll be able to and Touchlab doesn’t get me blacklisted 😉 In the meantime, let’s build the future of Android together, so there is something to talk about next year. 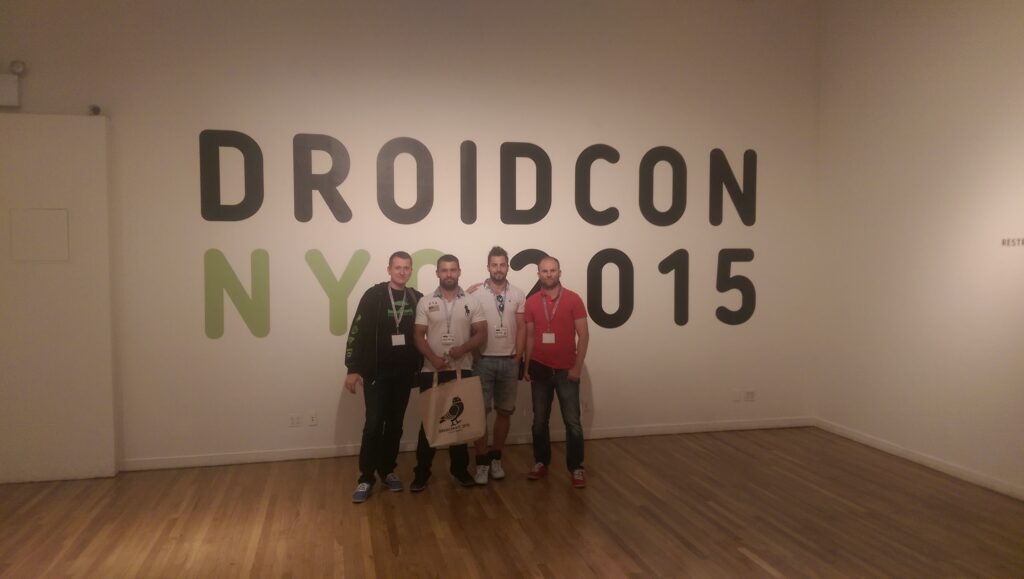